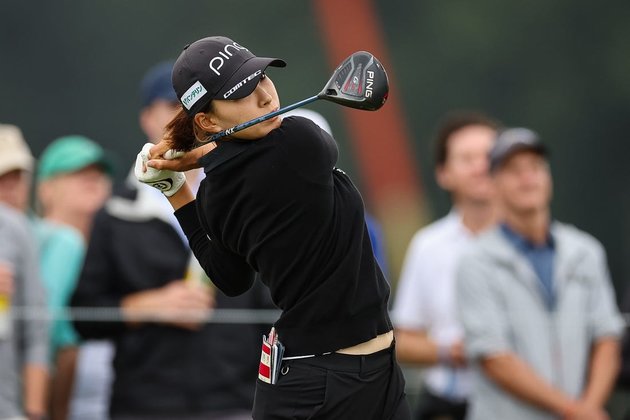 Hinako Shibuno of Japan carded a 6-under-par 65 to seize a one-stroke lead at the AIG Women's Open on Thursday in Gullane, Scotland.

Shibuno, the 2019 Women's Open champion, birdied her first three holes and finished with eight against two bogeys on a breezy day at historic Muirfield.

The 23-year-old is off to a fast start after three missed cuts and a withdrawal in her last four starts on the LPGA Tour.

"It has been a long time since I've played this well, especially putting. Honestly it was a little frightening," Shibuno said.

Jessica Korda overcame a bogey on the second hole to register four birdies and an eagle on the 17th to reside in second place at 5-under.

Korda admitted that she is not even looking at the leaderboard. Instead, she did have good news about the whereabouts of her suitcase that was lost on her flight over to Scotland.

"I know where it is. I have an air tag on it," Korda said. "I just can't get anyone to actually go get it."

Gaby Lopez of Mexico and Louise Duncan of Scotland sit one stroke back in a tie for third place. Duncan, the 2021 Women's Amateur champion, made her professional debut last week at the Scottish Open.

"It was worth the 4:30 (a.m.) alarm," said Duncan, part of the first pairing off the tee Thursday morning. "I'm glad it's over with and I played well.

"I got a with wee bit down on myself last week. It was obvious. My head was down. I just wasn't in a good mood, to be honest. But yeah, today was in a good mood and played well."

Canada's Brooke Henderson, who won the recent Evian Championship, recorded a bogey on her last hole to fall to a 13-way tie at 1-under. Despite her late misstep, Henderson is keeping positive ahead of the second round.

"The back nine just made a lot of like 6-footers to kind of just keep the momentum going forward. Hopefully tomorrow just go out and make an early birdie and makeup for today," Henderson said.

"But it's really tough out there, so I think if we can just play steady the rest of the week, it will be good."

Defending champion Anna Nordqvist recorded three of her four bogeys on the back nine to finds herself in a tie for 75th place at 3-over.