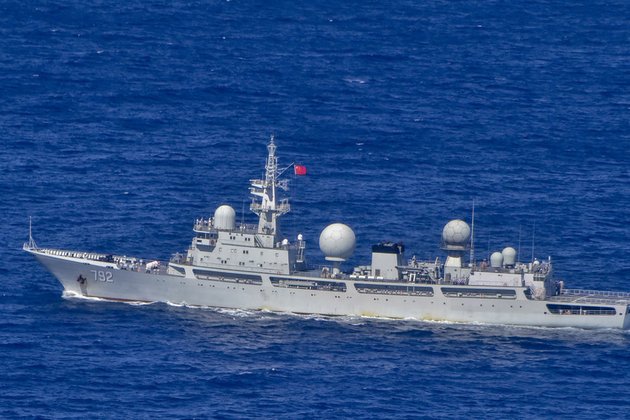 Western Australia Premier Mark McGowan called Defense Minister Peter Dutton "the biggest threat to national security" on Monday, after Dutton called China's sailing of a warship past Australia's coast an "aggressive act." While the sailing alarmed Aussie authorities, McGowan insisted that Australia and the US regularly do the same thing to China.

Dutton announced last week that a Chinese vessel had sailed south along Australia's west coast, before hugging the coastline on its way back up to the northeast. Staying within 250 nautical miles of Australian shores on its way northeast, the Chinese ship intended to "collect intelligence right along the coastline," Dutton said.

"I think it is an aggressive act and I think particularly because it has come so far south. For it to come south of Exmouth is without precedent," he said, referring to the southernmost point - a Royal Australian Air Force base - that the vessel passed before returning northeast.

Speaking at a campaign event with Labor leader Anthony Albanese, McGowan was asked whether he agreed with Dutton's claim that the Chinese sailing was "dangerous."

"[Dutton's] language around war and around 'we've got to be prepared to fight' ... it's highly dangerous and it's against the national interest," McGowan added. "It's inflammatory and unnecessary and I just think he's the biggest threat to national security."

Dutton's ministry and the government of Prime Minister Scott Morrison has been squarely focused on China in recent weeks. Canberra accused Beijing of "dangerous and reckless" behavior in February, after a Chinese ship allegedly shone a laser at an Australian surveillance plane.

The signing of a security pact between China and the Solomon Islands - situated around 2,000km off Australia's northeastern coast - has also stoked fears of Chinese expansion in the Pacific, and led Morrison to warn Beijing last month against crossing a "red line" by setting up a military base on the Solomons. Beijing denies that it is planning on building such a base.

However, McGowan claimed that Dutton's decision to publicize the Chinese sailing was "just politics" ahead of next week's federal elections.

An official statement from the Australian Ministry of Defense was notably more measured than Dutton's rhetoric as well.

"Australia respects the right of all states to exercise freedom of navigation and overflight in international waters and airspace, just as we expect others to respect our right to do the same," the statement read. "[We] will continue to monitor the ship's operation in our maritime approaches."