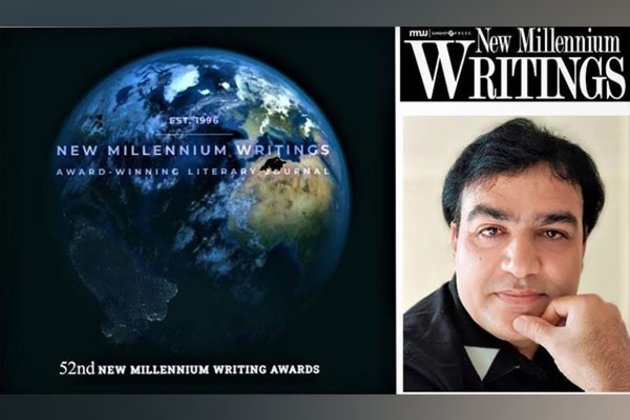 New Delhi [India], February 4 (ANI/ATK): Sandeep Kumar Mishra from India, a poet, artist, editor and lecturer, is among the top ten poets from around the world, who has been selected to be featured in 'New Millennium Writings Award-2021.

In 'Immigration' Indian poet Sandeep Kumar Mishra shares his own experience and history with Australian immigration. He left his family home in order to escape the financial crisis and in search of a freer, more peaceful life. Upon arrival in Australia, he was met with unemployment, hunger, health issues and racism and the various struggles outlined in the poem. He is still uncertain about his future as he has been refused visa to stay in Australia.

Mishra is one of ten finalists in the competition selected from around the world. The work that has been selected for this award has been republished in the O Henry Prize Anthology, Best New Stories from the South and the Pushcart Prize collection. Among past winners are Robert Clark Young, Laura S. Distelheim, Morgan McDermott, and Vivian Shipley. Winner of a Golden Press Award for Excellence, the magazine has published such notable authors as Susan Vreeland, Madison Smartt Bell and Shelby Foote, and interviews with literary giants like John Updike and Norman Mailer.

As we know Sandeep Kumar Mishra, has also been shortlisted for "International Book Awards-2021" by American Book Fest. His book "One Heart- Many Break" is also featured at "The 2021 New York Book Festival. He also has awards such as "Indian Achievers Award-21", "IPR Annual Award-2020" and "Literary Titan Award-2020", "Indies Today Book of the Year Award 2020" and "Joy Bale Boone Poetry Prize 2021" and "Oprelle Rise up Poetry Prize 2021". He was also "The Story Mirror Author of the Year" nominee-2019.

This story is provided by ATK. ANI will not be responsible in any way for the content of this article. (ANI/ATK)