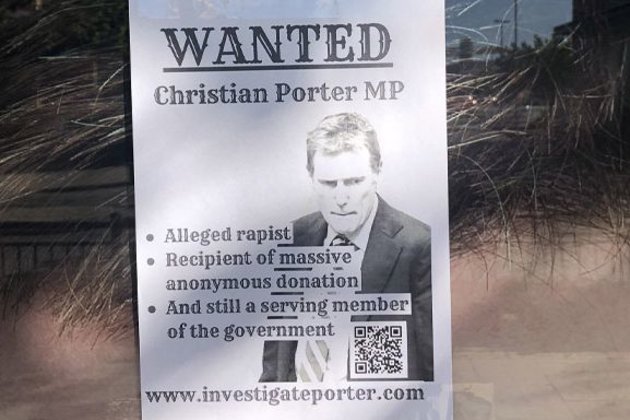 Since the Government refuses to investigate many of the allegations against Christian Porter, concerned citizens are beginning to speak out, writes Emma Willson.

POSTERS WERE SEEN taped to the front window of Christian Porter's offices in the main street of Joondalup on Sunday, in the heart of the seat of Pearce where he maintains a precarious position.

The posters direct viewers to the website www.investigateporter.com which provides links and actions for members of the public to join the campaign.

The same poster has been seen throughout the Perth CBD and across Australia, and is trending via the hashtag #investigateporter.

Christian Porter has resigned from Cabinet following revelations that he accepted a large donation of money to fund his personal legal proceedings and refuses to disclose the source of the donation. While the Liberal Party was not moved to investigate Porter following horrific rape allegations earlier this year, the latest scandal is enough for them to conduct polling in the electorate of Pearce to see if he stands a chance of holding the seat at the next election.

There is deep community concern that Porter's retreat to the backbench will only be temporary and that he is biding his time to make a return in the manner of disgraced MP Barnaby Joyce, who has himself expressed his desire for Porter to make a comeback. Currently, there are calls for sexual harassment allegations against Joyce to be revisited.

Porter was also recently alleged to have used taxpayer money to facilitate his relationship with his girlfriend. For those in the community who believe that elected representatives should be held to a basic standard of decency, this is nowhere near good enough.

The Prime Minister's continued lack of response to call for an independent investigation into the rape allegations against Porter shows a deep contempt and disrespect to survivors of sexual assault and for women. A spate of reports of sexual misconduct since then have revealed a toxic culture within Parliament House that the Government refuses to acknowledge or remedy.

Christian Porter has resigned from the Morrison Cabinet - but not from Parliament - following his acceptance of a large donation to fund his legal battles.

Instead, the Government appears to be hoping that if they just ignore the voices of dissent for long enough, they will go away. This is a laughable tactic in the age of social media, where news is instant and citizen activism is more accessible than ever before.

Early this year, thousands of people marched to demand an end to the culture of inequality that enables an epidemic of violence against women. The well attended and large-scale events were organised very quickly in a short period of time. Since then, several grassroots campaigns which were focused on investigating Porter have now expanded to join the growing number of voices demanding the establishment of an effective and fair Federal Independent Commission Against Corruption. A political Party named Federal ICAC Now with this sole intent was registered by the AEC on 2 September 2021 and will stand candidates at the next election.

Fair Agenda has launched a campaign that at the time of writing has 16,747 supporters, calling for the establishment of an independent inquiry into the rape allegations against Porter. Every Friday for over six months, a group of protesters has gathered outside the offices of Bunbury Liberal MP Nola Marino, asking her to meet with them and discuss their concerns. (So far, she has ignored them.)

Ordinary people are sharing their stories and becoming inspired to stand up and speak out. Whilst posters sticky-taped to office windows and crosswalk poles may seem like a small thing, they are an indication of persistent and vocal discontent that the Government would be foolish to ignore.

Emma Willson is a writer based on Wadjuk Noongar Boodjar. You can follow her on Twitter: @EmmaJWillson.