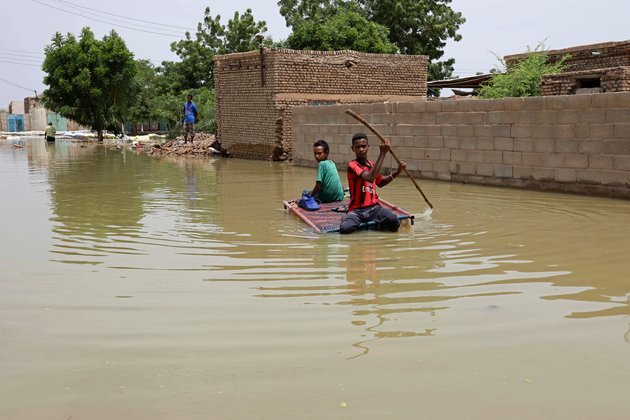 The FAO's director of emergency response, Dominique Burgeon, told the agriculture ministry Wednesday in Khartoum that a joint assessment conducted by the FAO and the transitional government found more than 2 million hectares of farmland have been affected by floods, putting many Sudanese families at risk of dire food shortages.

Small-scale farmers, who were already on the verge of food insecurity, also saw more than 100,000 head of livestock destroyed in the floods, according to Burgeon.

"We could see the truly massive impact of the floods not only on commercial farmers, which are critical for the provision of employment for so many people, but also to the small-scale farmers," whom Burgeon said rely on food production to feed their children "who once again will be most severely affected."

Burgeon warned of looming food shortages in Sennar, Blue Nile and White Nile states, along with parts of eastern Sudan.

"In the area where we have gone, the level of acute food insecurity before the floods was already very high," said Burgeon.

Part of the $70-million pledge will be used to provide food, shelter and medicine to food insecure families, according to Sudan's minister for labor and social development, Lina Al Sheikh, who heads Sudan's task force on flood response.

"There are places that are already facing high levels of malnutrition or we could say they have been at risk of facing food insecurity. We need to rush and intervene to save such communities before they face more levels of food insecurity," said Al Sheikh.

He called on civil society activists, youth groups and other volunteer groups to work with the transitional government and U.N. agencies to support the hundreds of thousands of flood victims, noting that many people who worked on farms destroyed in the floods have no income.

"Most of them used to depend on the daily casual work in those farms. That is apart from other thousands of families that depend also on their farms in producing their own food," said Al Sheikh.