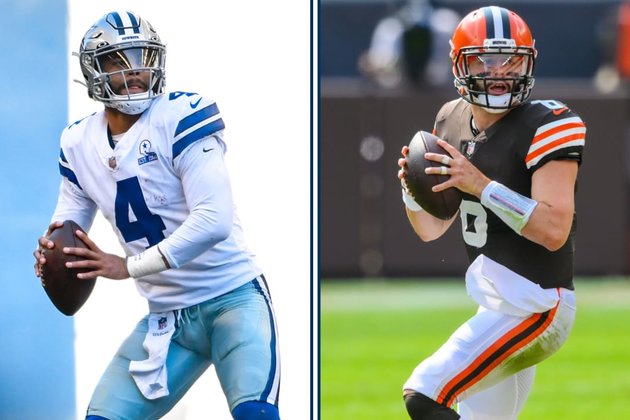 Through the first three weeks of the 2020 NFL season, the Cowboys have faced three straight quarterbacks that have either won or been to a Super Bowl. Even though that streak ends this week as the Cleveland Browns come to town, they're tasked with facing a pair of first overall draft picks (both from Texas), along with a high-powered set of skill positions.

This week's matchup could easily get both teams on track to control their own destiny or place them further into an early season hole. Here are some of the key storylines for each team.

Browns Things are finally looking up in Cleveland is above .500 for the first time since Dec. 7, 2014. To get an idea of how long ago that was, a loss dropped the Browns to 7-6 and led to the debut start of Texas A&M Heisman Trophy winter Johnny Manziel a week later. Defensive end Myles Garrett had just finished his first season at Texas A&M and Baker Mayfield his first with Oklahoma. Though they opened the season with a blowout loss to Baltimore, the Browns strung together back-to-back wins against both Cincinnati and Washington to climb to 2-1. First year head coach Kevin Stefanski has changed the thought process when it comes to dual backfield of Nick Chubb and Kareem Hunt. Chubb, who has already tallied over 300 yards from scrimmage this season has found a home behind an improved offensive line to the tune of 5.7 yards per carry. Hunt, who arrived in Cleveland last season, is not too far behind as he has close to 250 total yards and three touchdowns. Both pose a receiving threat out of the backfield and a matchup nightmare for opposing defenses. Sunday serves as a homecoming for both Arlington native Myles Garrett and Austin product Baker Mayfield. Garrett was a star at nearby Arlington Martin that sat just 14 miles from AT&T Stadium where he earned a consensus five-star rating. He ranked as one of the top players in the country with 39 sacks his senior year. On the other side of the ball, while Mayfield is not from the Dallas-Fort Worth Metroplex, he did win a state championship there. During his junior season with Lake Travis High School, Mayfield led a 16-0 campaign that capped off with a 22-7 over Waco Midway under the lights at AT&T Stadium. Former Cowboys edge rusher Joe Jackson has been playing well during his short stint in Cleveland. Jackson was claimed off waivers at the beginning of the month and has been a successful fill-in for Olivier Vernon who has been dealing with an abdominal injury. He saw his first playing time with a key fumble recovery in the Week Two win over the Bengals. He then saw more playing time with 19 snaps last week against Washington where he forced a tackle in his backup duties. While the Browns defense struggled on multiple occasions through the first two weeks of the season, they bounced back on Sunday as they forced five turnovers against Washington. Following 68 combined points through weeks one and two, Karl Joseph, Malcolm Smith, and B.J. Goodson each picked off Dwayne Haskins while both Garrett and Tavierre Thomas recovered fumbles in the win. Cowboys With both Tyron Smith and La'el Collins sidelined at the offensive tackle position Sunday, the line saw some shifting in personnel during the loss to Seattle. The musical chairs started when Terrence Steele left the game in the second half and forced Zack Martin to slide out to the right tackle slot while Joe Looney played right guard and Tyler Biadasz took over at center. Entering Week Four, there still is optimism surrounding the potential return of Smith after he missed the last two weeks with stingers in his neck. However, the line appears they will have to account for the absence of Collins for at least another week, according to the words of both Mike McCarthy and Stephen Jones. The NFL currently has the most unlikely of sack leaders, Cowboys edge rusher Aldon Smith holds the top spot with four. If it were still 2014, it wouldn't be a surprise to see Smith's name at the top of the list. But in only his third football game in five years, he brought Russell Wilson to the turf three times throughout Sunday's matchup with Seattle. He became just the third Cowboys player to record a three-sack performance since 1996 with DeMarcus Ware (eight-times) and DeMarcus Lawrence (twice). For the second straight week, Dak Prescott has had to lead a massive come-from-behind charge of 15-points or more. In the process of evaporating the deficit on Sunday, he finished with a career-high 57 passing attempts and 472 yards. It was also just the fourth time in his career where he has accounted for three or more turnovers in a single game. Over the last two weeks, the Cowboys defense has allowed a franchise-worst 77 points in a two-game span. However, when you look closer at the make-up of the massive number, the odds were not very high for the Cowboys to have success defensively. In those games, there were six defensive drives that started in their own territory due to either turnovers or a turnover on downs. All six of the drives resulted in points and accounted for 30 of the 77 total points that were scored by Dallas opponents. While there are plenty of issues entering the week on the Cowboys defensive side of the football, the offense has certainly not done them any favors at times over the last two games. The Cowboys continue to boast one of the best receiving corps in the country as they've posted four different 100-yard receivers in the last two weeks. In the win over Atlanta, Amari Cooper and CeeDee Lamb each reached the century mark while last week it was the duo of Michael Gallup and Cedrick Wilson, who was impressive throughout the shortened training camp, finished with a career-high 107 yards and the first two touchdowns of his NFL career.

Details on all of the health and safety procedures you can expect at AT&T Stadium this season can be viewed at www.DallasCowboys.com/safestadium.